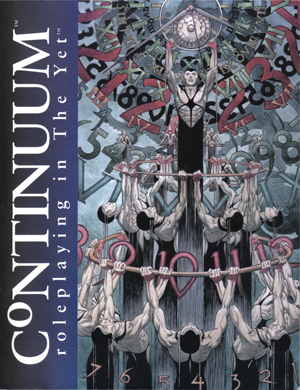 The most intellectual role-playing game I own has to be Continuum. It’s a game in which all the player characters, and most non-player characters, can travel through time at will. The game boasts one of the most thought-out, consistent models of time travel I’ve encountered. A spanner — slang for someone who spans time at will — has what is called her Yet, elements of her personal future that are known to her, usually because she encountered a future self, also known as an elder gemini, or someone who looked like her future self. The twist about the Yet is that the spanner is bound only by what she sees. If she spans ahead to next week, and sees herself going into the theatre carrying a silver bucket and knows she hasn’t already experienced that, that is an action in her Yet. Eventually, she will do so, otherwise experiencing frag, or an injurious dissonance as she is in a state of Is/Is Not.

Think of the Yet as a to do list. Failing to complete items on the list generate a state of frag, the spanner’s state of being not lining up with what she knew she was expected to do. Smart spanners will scratch items off their Yet list as efficiently as they can. So long as the spanner’s younger self sees what she saw, the universe is satisfied. That could mean staging entire scenarios to be witnessed by a younger gemini. Spanner society includes an entire Thespians fraternity, who specialize in providing the actors and props to fulfill the expectations of the Yet without necessarily suffering the drastic consequences that one’s elder might seem to have experienced.

A good recent example of this was season 6 of Doctor Who, which I will strive not to spoil. Early in the season, the characters witness a future event that seemed absolutely, positively incontrovertible. As their personal chronologies progress, the characters become increasingly aware of the impending seemingly incontrovertible event. And then the realization strikes that the event can happen as witnessed without necessarily having the presumed consequences.[1]

That’s a fraction of what you’ll find in Continuum, and the part I remember best. If you ever made sense of the game’s temporal combat, by all means, write in.

[1] The question arises: how could someone from a civilization of time travelers not have hit on the solution earlier? All I can suppose is that staid Time Lord civilization is founded wholly, start to finish, no exceptions, on preservation of “true history,” free of extratemporal manipulation — except for those that made them the sole chrononautical power, if you go by the New Adventures. The regrettable benefits of a bygone age, to be sure.