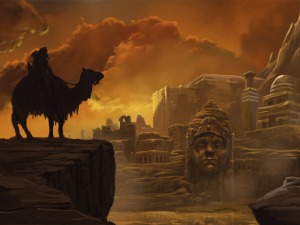 Tales from the Fallen Empire splash art, used with permission.

As James tells us:

Join the struggle for survival in a war-torn land where new empires arise to impose their will upon the masses. Vicious warlords fight to control territories carved out of fallen kingdoms. Imposing magicians emerge claiming the legacy of the Sorcerer Kings. High Priests of long forgotten gods and goddesses amass wealth in the name of divine right while Warrior-priests, devoted to a banished god, patrol the lands bringing justice to people abandoned by their rulers.

In addition to providing a gazetteer to the sundered lands of the Sorcerer Kings of old, Tales from the Fallen Empires modifies some of Dungeon Crawl Classics‘ core classes, as well as adds a bevy of its own: Barbarian, Witch, Draki, Wanderer, Man-Ape and Pirate. Carpio cites Lieber, Howard, Lovecraft, Corman and Moorcock as his sources, so you know it’s going to be a flavorful melange of elements and tropes.

The kickstarter campaign concludes on July 18th, 2012 and is well on its way to funding. There are many backing levels, but the two key levels are $15 for a PDF of the book and $30 for the print edition ($45 for international shipping).

I recently interviewed James about Tales of the Fallen Empire for Carnagecast. Once that episode posts, I’ll pass the word along so you can hear direct from the designer about his inspiration and goals for the world of Leviathan.

6/8/2012: As promised, here’s the Carnagecast episode link. James talks about his inspirations for the setting, what makes Leviathan unique and some of the interesting elements of Dungeon Crawl Classics.