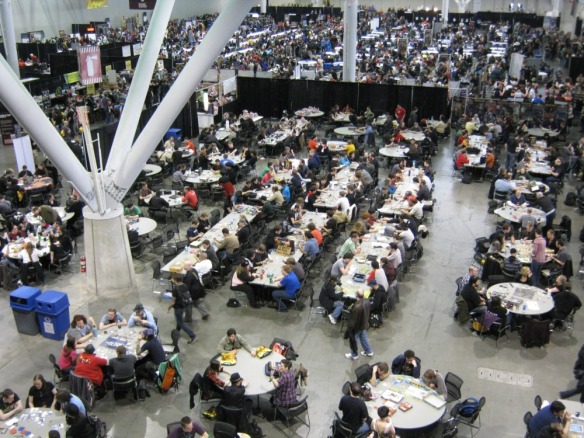 So PAX East happened. That was a thing. After spending the whole weekend in 2011, I decided to be more targeted in 2012 and only spend Saturday there. Plus, the convention fell on Easter weekend and the Easter Sunday dinner is a big tradition in my family.

PAX East grew, unsurprisingly. The exhibitor hall increased in size, as did the tabletop area. The exhibitor hall list was down in terms of things that interested me, namely tabletop-related stuff. Geek Chic was there, of course, and Mayfair Games, but that was about it. It turns out that was because a number of tabletop-centric booths were located in the tabletop area of the convention center.

The tabletop area looked like it doubled in width compared to 2011 — the length being constant in the hangar-like main space of the Boston convention center. It was filled mostly with tables for scheduled tournaments and free play. Where the forest of tables didn’t extend, there were booths for publishers, designers and retailers. Companies like Foam Brain Games and Fantasy Flight Games smartly moved into the tabletop area this year. Not only did that put them in better sight of their target audience, but they could stay in business longer. The exhibitor hall closed at 6:00pm each night, while the tabletop area kept rocking til much later.

The trade-off to that decision might be that they lost out on ensnaring people who were brand new to tabletop games. One of the key sights I remember from last year was the glut of people wandering the floor or clearing table space to tear into their new copy of Mansions of Madness. How much of that was the game’s newness versus drawing in interested video games, I couldn’t say. I wish I could peek at the sales numbers of 2011 and 2012 to compare.

The tabletop game area kept busy all day long. Last year, you could track the day by the activity level in the area as people came and went. This year, it seemed most tables were occupied and gaming underway all Saturday long.

While I got to try to plenty of board game demos — find out more on the carcast we recorded going home — I didn’t break into any role-playing. Wizards of the Coast had their marshaling area/holding pen, which didn’t really appeal. Games on Demand were present, but that required me to pull together a group of players on my own. Pandemonium Books & Games had an actual schedule of board and role-playing games to be run throughout the weekend, but those times never jived with my own. So it goes, right?

All in all, PAX East was really a spectacle for me. I saw a lot of cool things, but I didn’t get to do as many of them as I might have liked. But it was a pretty good day and a pretty good weekend trip to Boston. Except for one thing. Having covered the positive, PAX-related aspects of the trip, I’m going to get into the huge stinker of a problem that set an absolute low for the weekend.

The hotel, on the other hand, got off to an awful start. We had a room at the Westin Waterfront, which is right next to the BCEC. Check-in time was 3:00pm on Friday. When we arrived at that time, we were told there was a backlog of rooms turning over as people checked out, so ours wasn’t ready. The desk person took my number and said they’d call when it was ready.

After an hour, I checked back. The room still wasn’t ready. After another hour and a half, for a total of two and a half hours, the person then at the desk discovered that why yes, that room was ready. No one had bothered to notify us. And there was no concern expressed on the staff’s part about the time we lost or inconveniences experienced.

The Westin really fell down on this one. They didn’t make their commitment of the check-in time and then didn’t follow through on notifying us when the room was ready. As a result, we lost two and a half hours thinking “just a little bit longer” would be something approximating an actual little bit.

While I get that as many people who filled the Westin and BCEC can be daunting and I have nothing but sympathy for the people on the ground in housekeeping and front office of the hotel, who were doubtless overwhelmed, I am hugely disappointed by the overall experience. Aside from this not being the first time PAX came to the Westin and BCEC, it cannot be the Westin’s first rodeo at all. They were seemingly unprepared for the volume of people passing through the hotel, even though it sold out months before. That lack of preparation and contingencies for travelers coming from out of town with nowhere to go was an outright failure on their part.

Thanks to Twitter, I had an interesting conversation with some employees of the chain. You can find the public portion of the conversation begin here with @WestinWatrFront, then @StarwoodBuzz — Starwood is the hotel group to which the Westin brand belongs — picks up the baton. That exchange went on sporadically through the weekend as I walked in and out of wireless availability. It culminated in an emailed apology from an employee of the Westin Waterfront, saying they were sorry and “We did have some challenges with this particular convention but our staff did everything possible to accommodate everyone.”

Yes, guests without a room to check in and not offering anything to help with luggage or making the wait more pleasant is certainly a challenging situation. And who can blame them? PAX East is a guaranteed sell-out. The Westin can do pretty much as they please and never run short of customers for that weekend. I don’t doubt they’ll go far with that tactic.

The ironic part is the night before, we had a completely trouble-free stay at the Boston Sheraton, also part of the Starwood group. The Sheraton was in the throes of Anime Boston plus early PAX East arrivals and they did just great by us. I hope those two compare notes sometime in the next year.

For more thoughts on the weekend, check out the Carnagecast extrasode Escape from PAX East, recorded with my friend Sarah during the drive home from Boston to Vermont. We talk about the games we played: Castellan, Chupacabra, Ice Dice, Star Trek Deck Building Game, Ticket to Ride India and Asia.

I have a write-up of my trip to PAX East 2012 in the works. In the meantime, enjoy this prelude to the weekend, a Carnagecast extrasode recorded with my friend Sarah and I on our way down to Boston the night before the convention.

We talk about what we hope to do during the trip and whether an audiologist can distinguish modern sculpture from giant stompy robots.

Last week, I traveled down to PAX East in Boston, the eastern cousin of PAX (Penny Arcade Expo), a game and media show put on — ultimately — by the authors of the Penny Arcade web comic. All things considered, it was a really good weekend. PAX East was easily the biggest convention I’ve ever attended; I’ve seen a figure of 69,500 attendees, but that must be turnstile, rather than unique individuals. At any rate, the joint was huge and so were the teeming throngs of conventioneers.

In spite of pumping contacts who’d gone to the previous PAX East for information, I had difficulty envisioning just what to expect. How much tabletop gaming would there actually be, given the undeniable prevalence of electronic games in the Penny Arcade community? A lot, as it turned out.

A whole slice of the main hall outside the main exhibition area was given over to tabletop games. Wizards of the Coast had dozens of tables running their Dungeons & Dragons encounter series, Fantasy Flight Games spent the weekend in the expo area teaching Civilization, Mansions of Madness and Death Angels, Steve Jackson Games had a booth for demoing their newest games, Z-Man Games had an extraordinary selection of titles to show and sell, Indie Press Revolution and another unnamed group of independent role-playing game publishers were showing off their games. Plus there were more demos of board games by Days of Wonder, Gamewright, Looney Labs and other independent outfits whose names I didn’t catch. Plus, the Tabletop Headquarters had a fair size game library for attendees to browse, including a number of titles that must have been donated by companies demonstrating at the show.

Basically, there were a lot of damn tabletop games to play. I didn’t do everything on my hit list — I skipped the Action Castle panel on Friday, but got a quick ten minute try-out the next morning at the booth — but then I tried things I didn’t expect, either, like a preview of Ice Dice from a Looney Labs volunteer, or a Rogue Trader adventure run by gaming gadabout Bob. If you want to see the full list of things I played, visit my play log at Boardgame- and RPGGeek.

Of the panels I did attend, there was the rather civil Dungeons & Dragons Edition Wars; the Rat Bastard’s Guide to Long Campaigns, which was somewhat misleading in its title, given the lack of rat bastardry; Publish Your Own RPG — And Don’t Go Broke Doing It!, which let me down because a lot of the advice boiled down to “get on the internet; use free tools and media”; and Careers in Paper Gaming, which also contained a lot of familiar advice. I’m probably a outlier due to paying attention to shop-talk discussion threads in the various role-playing forums out there, so I hope plenty of other people found those panels enlightening.

Social media played a role in the convention that I expected, but underestimated. Sure, there was the #paxeast hash tag, but there was a lot more whizzing around through cell networks and the convention center’s wifi — which was frustrating in its spottiness, but hardly surprising given the number of devices probably trying to make use of it. Gamers used Twitter to find extra players for games; companies used it to announce deals. On returning from Boston, I belatedly discovered the bustling forum community that used the PAX event as an umbrella under which to organize their own activities.

And in spite of all that, I only saw a portion of the whole show. There was the whole world of electronic gaming that I essentially ignored. The only time I went near it was to attend Bill Amend‘s Further Greetings from a Dead Tree Dinosaur Cartoonist panel on Sunday in the main theater. Then I remembered, “Oh yes, there’s console gaming and PC gaming and look, stand-up arcade machines!”

In short, PAX East was an instance of “far more to see and do than you can cram into a weekend, so don’t sweat it.” It was a fun experience and now I have an idea of what to expect next year and how to go about getting what I want out of the experience.

Below the jump, you’ll find a smattering of pictures I snapped over the weekend.

END_OF_DOCUMENT_TOKEN_TO_BE_REPLACED

I’ve gone to PAX East for the weekend. Things I hope to achieve:

Depending on wifi availability, you may hear from me via Twitter during the weekend. Follow @heldaction for on the spot updates, not dissimilar from “Wow, the Sultan is beautiful!” and “This place is big and noisy.”