With Winter Weirdness this past weekend in Barre, I took the opportunity to record an entirely solo episode of Carnagecast, talking about what I got to play and do that day.

I went out of my comfort zone on this episode. I always prefer to have another person with whom to converse on the podcast, but in this case, time was short and I was reminded there are people out there who have made the monologue their format of choice, like Mike Schmidt of The 40 Year Old Boy and Mike Luoma of Glow in the Dark Radio. Now, both Mikes are professional talkers and significantly practiced at their craft, so I’m thinking of this as a tiny glimpse into the format, a way to get a sense of what it’s like.

And after my first attempt — not counting short intros and outros I’ve done for prior Carnagecast episodes — I will say that recording solo is nerve-wracking. Every slip of the tongue is amplified when talking to oneself. Next time — and I guess there will be a next time, because now I can no longer lament not being able to line up a guest in time to post for Monday morning — I think I’ll go for more of the audio essay style, probably because I plowed through a head of Rumblestrip Vermont episodes over the weekend. I am nothing if not a palimpsest of influences. 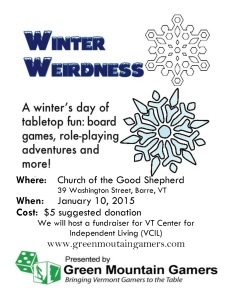 Winter Weirdness is coming up this Saturday in Barre. My dance card already has Eldritch Horror with the new Mountains of Madness expansion, so that will be a fun way to kick off the day. Hopefully after that, I can get in some face-to-face Sentinels of the Multiverse and perhaps even Call of Cthulhu.

Come play some games, meet neat people and benefit a good cause! 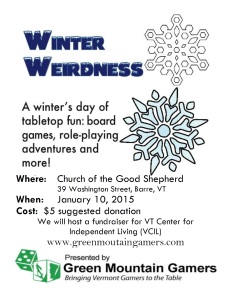 Green Mountain Gamers announced the time and place for their Winter Weirdness game day: January 10th, 2015, from 10am to 10pm at the Church of the Good Shepherd in Barre, Vermont. Mark your calendars!

The Church of the Good Shepherd’s been a pretty amazing space for these game days. The undercroft is a cozy space that’s like a cross between a church hall and a rec room. The church has always been a great host, and Green Mountain Gamers tries to return the favor, first with a food drive to benefit the church’s food shelf and now a raffle to benefit the Vermont Center for Independent Living.

These game days are great casual, drop-in events. Bring a game, try someone else’s — I foresee lots of new holiday loot fresh from the shrinkwrap — and make some new friends. It’ll be fun!

(And Green Mountain Gamers announced the date of their mega-sized spring game day: March 15th at the steadfast Lake Morey Resort in Fairlee.)

Green Mountain Gamers return to the Burlington area for Fall-loha 2014, their annual autumnal game day, on September 27th. This year, they’re classing up the party by hosting it at the Windjammer Inn & Conference Center in South Burlington, convenient to the greater Burlington area, the interstate and some pretty good food nearby. It’s a free event, though a suggested donation of $5 is gratefully accepted to offset the costs of hosting the day.

It’s always interesting to see the turnout at a Green Mountain Gamers event, because it’s usually half people I know, and half newcomers. And in Burlington, my own stomping grounds, those newcomers may turn out to be from around the corner. Last year, that’s how I discovered the existence of Brap’s Magic, a new local game store. This year, who knows who I’ll meet?

I’ve been on a Sentinels of the Multiverse kick lately, so I’m hoping to play that, especially since my friends scored me two alternate hero cards at GenCon: Dark Watch Mr. Fixer and Super-Scientific Tachyon, which I will receive at the game day. I’ll have my Call of Cthulhu decks, too, of course. Doomtown, too, if there’s interest.[1]

Green Mountain Gamers always put on a good time, so I’m really looking forward to this game day — and the shorter commute.

[1] When did I turn into such a card-flopper?

Yesterday, Green Mountain Gamers hosted their summer game day, complete with grill for flame-based food preparation. I got to play:

It was an ungodly gorgeous day outside, but we had a lot of fun hanging out at the Vergennes’ Congregational Church. The venue is very nice, the organizers had everything together — especially the lead, Chuck — and the snacks were better than ever. Green Mountain Gamers put on these free events, running off donations, and they’re always a great time. Congratulations to them for making them happen all year round.

Spring Meltdown is mere days away. It feels like it’s been forever since our last tabletop game-stravaganza in Barre, but really it’s only been four and a bit months.

What can you expect at a Spring Meltdown? Let’s go down the list:

Spring Meltdown 2012 happens April 21st at the grange hall on York Street in Lyndonville, Vermont. From 10:00am to 10:00pm, it’s open tabletop gaming. Dark Tower Gaming will run a pair of Magic: the Gathering tournaments. They and Triple Play will be vending, should someone have a gaming-related shopping need.

Spring Meltdown, a tabletop game day, comes to Lyndonville, Vermont on April 21st. From 10:00am to 10:00pm at the grange, game enthusiasts gather for some tabletop action. It’s a free-for-all of open gaming, so bring something to share or come eager to try something new among the myriad games other participants make available.

Hosted by Green Mountain Gamers, a group of which I’m a part, Spring Meltdown is one in a series of quarterly game days traveling around the state of Vermont. We’ve had a lot of success with the traveling model, meeting gamers from all over the state who we might not have otherwise met. And now we’re headed back to the Northeast Kingdom! 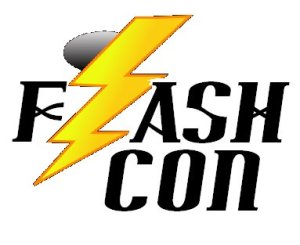 The second FlashCon is already on the horizon for March 25th at the Kilton Public Library in West Lebanon, New Hampshire. Like the name implies, FlashCons are spry and nimble, appearing almost unexpectedly wherever there are tables and chairs for gaming hobbyists to enact their pastimes.

This FlashCon follows the manner of the first with a two hour block for shorter games or teaching sessions, then a longer second block in the later afternoon for the full-on tabletop experience.

Organizer Gordon Spaeth is looking for people share and teach games, so if you’ve got a favorite board game or a role-playing adventure in your pocket, get in touch with him through the Facebook page or via Green Mountain Gamers. If you come from the other end of the spectrum and are curious about all this tabletop hoo-hah, FlashCon is an ideal opportunity to dip your toe in.

By and large, I am lucky to have a job that’s not terribly demanding on my time. Enough so that I can run a role-playing campaign, go to board game night most Tuesdays and skip off for weekend conventions and game days without too much hassle. So when real life crops up in a big way, I do my best to take it with a minimum of ruffled feathers.

This week, for instance, I “get” to work on Saturday morning, which is right when Fall-loha kicks off. This is only the second time I’ll have missed a bit of a Green Mountain Game day, the last being the Middlebury Meltdown, when I was laid low by crud.

But hey, I’ll still get out to the festivities by the late afternoon, so I won’t miss this one completely. Perhaps I will even find some eager souls to help playtest Eye of the Qlippothim, too.

After kicking up a flurry of bytes by making the rounds to get the word out about Fall-loha, I find I completely forgot to post about it here.

Fall-loha 2011 marks the return of the Green Mountain Game Days to the Burlington area since we launched into this endeavor of hosting quarterly game days all around the state of Vermont. It promises to be as much fun as all the others. Saturday, August 27th — we’re getting a jump on fall, so it won’t see us coming — the fun is at the United Church of Underhill, right in Underhill itself.

Over the last year, we’ve learned a few things about how to do these game days: people don’t seem to care what kind of soda is on hand, as long as it’s there; board game tournaments aren’t very popular; some folks like to take advantage of the block of time to play out the long games: Battlestar Galactica and so on.

Personally, I shall be attempting a playtest of my GURPS Cabal adventure for Carnage. That gives me a set amount of time in which to do my prep work, including character creation.

Should be a good time, no matter what. I hope to see some Burlington folks there who don’t normally get out to these game days.