Another Carnage has come and gone. I spent most of the weekend working in the Snowshed, where the role-playing and card games were based, but I did manage to play some games:

The Game with No Name math trade netted me some great stuff, too. I turned HERO books, Gamma World and Revolution! into Netrunner cards — hello, Grimoire playset! — and a classic copy of Wiz-War, which I’ve wanted to try more of. Plus, after the trade concluded, I got to help a lady rebuild part of her Cheapass Games collection, after a tragic loss to fire. So this year’s trade was a win on multiple levels.

Our second year at Killington was good. We had a better idea of what to expect and how to do things. There were unanticipated questions, of course, with the resort and our attendees, but nothing outside the usual stretch. In the end, we had a great convention, and folks had fun. Mission accomplished!

Most of the games I wish I owned are theoretical. The perfect mashup of Mage: the Ascension, GURPS Cabal and Buffy the Vampire Slayer, for instance. Someone toyed with that idea. A game set in John Bellairs‘ Capharnum County, with Lewis Barnavelt, Uncle Jonathan, Mrs Zimmerman and Rose Rita is beyond hope. Although my ears pricked up when I hear Ken Hite say that Bubblegumshoe would emulate, in part, Bellairs’ work. But it’s been a while since that news dropped, so who knows how that project has progressed or changed since then.

As for games in the real world, the one that I want that I haven’t picked up is — shock! — Doctor Who: Adventures in Time and Space.

Right? I love Doctor Who, have run a game in the universe, but never got around to owning any of the Cubicle 7 materials. And that’s mostly because I have enough game materials that can emulate Doctor Who without buying the licensed version. I know, I’m a terrible fan.

The weirdness of my role-playing game library expresses itself in more subtle ways than, say, your Maids and your Creeks and Crawdads. Check out my friend Joe’s list of really atypical settings for that kind of thing. No, the oddities of my library are far more occulted to the unsuspecting reader. The prime candidate is, of course, the Suppressed Transmission collections. Not a role-playing game, per se,[1] but columns by Kenneth Hite that are near paens to the high weirdness of history, bunk science and mystic traditions. They’re a glorious goldmine of tidbits like the possible true identities of Shakespeare, the effect Dr. Frankenstein’s research may have had on history and the cavalcade of forms that ultraterrestrials have taken over the years. Riding shotgun with the Suppressed Transmission collections is, of course, Mage: the Ascension, which also drew from, and spindled more freely, occult traditions to populate its factions of will-workers.

Consider also the weirdness of “What on Earth was the designer thinking?” There’s no end to that question in role-playing games, where half the time the writing of a book seems to be so intensely personal a process that the designer maybe doesn’t share their thoughts out loud with neutral observers until they feel the project has progressed too far to make any sweeping changes. The example that first comes to mind is Time Lord, the Doctor Who role-playing game published by Virgin that famously lacked suitably robust character creation rules to serve the breadth and depth of types of people the Doctor travels with.[2] This lack was made up for an appendix release some time after publication to the internet, and you can usually find it appropriately appended to digital versions of the text in circulation.

And finally, an honorable mention goes to Deadlands Reloaded, as it is literally set in the Weird West.

Weirdness: it’s where you least expect to find it. That’s what makes it weird.

[1] Though Hite discoursed occasionally on tying the disparate lunacy of his columns together into overarching campaign frameworks.

[2] Particularly in an era when the property’s ongoing materials was purely novels, which had a limitless budget, so far as make-up effects went. 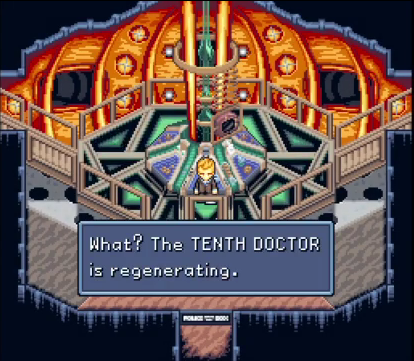 Not quite the Doctor Who role-playing you may be looking for, here’s an amusing take of recent events in the show as a console RPG. Looking like it hails from the halcyon days of turn-based combat and curious choices in sentence construction, this video takes you through the last two seasons of Doctor Who, as seen through the lens of a console RPG. Companions are gained and lost, bizarre actions rendered as characters waving an arm in the air and through it all, we are reassured as to the reason for all these shenanigans.

Check out the video over on CollegeHumor.com.

I have one of those Amazon credit cards that racks up points one can spend in lieu of cash on stuff there. The balance is rapidly approaching a sum amenable to a number of game-related products I’d like to buy.

Express your opinion, o readers of Held Action. What do you think I should get? I make no promises, but I am open to suggestions of things I hadn’t considered.

We’ll be traveling non-linearly through the Scions of Time campaign for a couple weeks as I need to backtrack on a couple sessions that went undocumented in my recent blogging lethargy. They happened so long ago, I need to dig out my notes — some of which are as vague as “waffle wagon.”

Merrily careening through the vortex with no particular destination in sight, Challenger and his companions Airfor and Caradoc[1] are thrown to the ground when the ship abruptly lurches to a halt. Challenger peers outside to see the breathtaking vistas of deep space before him, with a brilliant purple nebula filling much of the starscape — until the view is slowly obscured by silvery tendrils of a web-like substance.

Meanwhile, Airfor discovers from the TARDIS console read-outs that the engines are straining at maximum capacity, yet getting nowhere. Challenger shuts them down while she repairs damaged linkages. Caradoc experiments on the webbing with a laser torch, finding that the web repairs itself nearly as fast as he can cut it.[2] Using the chameleon circuit to transform the ship’s exterior into a sphere bristling with blades, Challenger cuts their way free of the web and the ship hurtles off into the void.

END_OF_DOCUMENT_TOKEN_TO_BE_REPLACED

John Seavey tells us how the Cybermen ought to be done:

[via The Door in Time]

Writing plot seeds is tricky. It’s easy to let yourself become repetitive. I find myself writing and rewriting them to stand out as unique. That’s why I so easily stalled on Plot-Seed-a-palooza. I do mean to get back to that someday.

In the meantime, enjoy revisiting some previously published plot seeds.

The time has come to weed the game library. Behind the jump you will find role-playing games, board games and card games I would like very much for someone else to own. Generally speaking, it’s all older stuff, so if you’re looking for titles from the 90s and early 00s, this might be the sale for you.