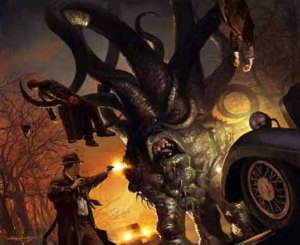 The Cthulhu Mythos of H.P. Lovecraft, or Cthunisystem for short, brings some of the classic elements of Call of Cthulhu role-playing to Cinematic Unisystem. Compiled by Salvatore Cucinotta and Jason Vey, it’s a great resource for adding mythos monsters and a different flavor of spell to your Unisystem games.

By default, it’s written for Cinematic Unisystem games like Buffy the Vampire Slayer and Angel, but it’s super easy to use the monster quicksheets with classic Unisystem rules, or extrapolate backward to a full stat block. Shave off any Drama Points the creature may have and call it good.

Dennis Detwiller’s The Gilchrist Trust would make an interesting antagonist association for WitchCraft, to go beyond its immediate Call of Cthulhu applications. The goal of the Trust, proving the existence of life after death, would bring them directly into contact with the Twilight Order and the House of Thanatos.

Given their self-assigned mission of maintaining the boundaries between life and death, the Order is almost automatically predisposed to act as a foil to Trust investigators’ efforts. “Mundanes,” as most Trust agents would be, aren’t supposed to know about ghosts and the otherworlds. I can see Twilight members actively following Trust agents to muddy their investigations, stealing artifacts under study by the Trust and racing them to newly uncovered locations and materials to remove any traces of necromantic practices.

The Thanatoi’s position on the Gilchrist Trust would be murkier. The House of Thanatos is more about boundary crossers. Their membership is made up of revenants, phantasms, vampires and other sorts who either blur the line, or caper merrily on both sides. So they’ve got the information that can win someone the big prize of the Gilchrist Trust. Whether any Thanatoi would be on board with that information exploding out to the public seems fairly unlikely. The afterlife is their specialty. The thought of it being legitimized and rigorously examined by even a fraction of the scientific establishment of the 1920s should be terrifying.

Of course, this is the 1920s. The occult world of WitchCraft is still reeling from the mini-reckoning of the Great War and the Spanish flu. The Twilight Order and the House of Thanatos are not likely to be entirely on their game at the moment — though maybe the Thanatoi’s rolls have had an influx of revenants and relentless dead from the fields of France; perhaps even Gilchrist’s son, Alexander. Moreover, the prospect of a cool million, or a sizable share of the Gilchrist fortune by taking the big prize, would be awfully tempting to the Gifted necromancer down on his luck. With the self-appointed guardians and experts of the afterlife at an ebb, this could be just the right time for the Gilchrist Trust and its agents to crack the afterlife wide open.

John Seavey tells us how the Cybermen ought to be done:

[via The Door in Time]

Insertname brought it up on RPG.net: using the Krampus as an antagonist in one’s role-playing games. Coming out of eastern Europe, particular Austria and Hungary, Krampus accompanies St. Nicholas on his journeys, warning children to behave and punishing those who don’t. So he’s the bad cop to St. Nicholas’ good. It’s the classic buddy situation.

1901-1910 saw a wave of over two million immigrants to the United States from Austria and Hungary. With so many believers living beyond the old country, St. Nicholas and Krampus expanded their travels to include the land of opportunity. When reports of a shadowy demon-like figure stalking St. Nicholas circulate among the “they know just enough to be dangerous” portion of the occult set, they undertaking the capture and banishment of the fiend lately come to America.

Doing so throws the balance of Christmas dangerously askew, of course. Without the threat of the Krampus’ punishment to keep them in line, children run amok in New York City. St. Nicholas correspondingly declines to travel the land. It’s a huge mess, one that can only be resolved by freeing the Krampus from his Leyden jar prison — and convincing him not to take it out on the well-meaning, if foolish occult investigators.

The League of Extraordinary Companions of St. Nicholas

St. Nicholas, it transpires, has a whole entourage of companions, scattered all across Europe. Typically they work alone or with Nick himself, rarely collaborating together. Every once in a while, though, there’s that one child so recalcitrant, so truculent, so incorrigible who requires the attention of an entire pantheon of corrective spirits, with Knecht Ruprecht corralling their efforts. They’ll put that child through metaphorical Hell before the night is over. It’s the preventative maintenance version of A Christmas Carol.

In the world of Unknown Armies, some clued-in goon has decided to scoot into the Invisible Clergy as the Dark Companion, the shadowy figure of questionable means and motives that follows so many more visible characters. Come Christmas-time, that means he’s emulating the behavior and signs of the Krampus, including terrifying the local children. This is not going down well in the community, never mind the occult underground. Representatives from the different factions present on the scene come together to put down this would-be Krampus before someone other than him gets hurt.