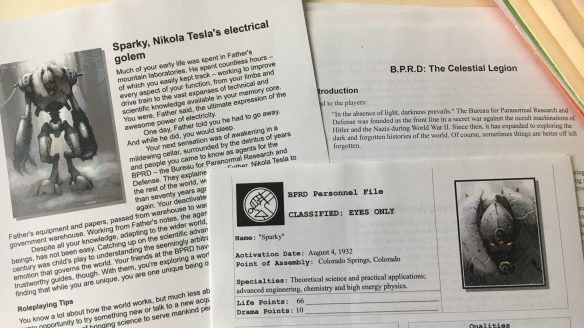 Sifting through more stuff in the wake of purging empty boxes, I came across a trove of materials from convention games I’ve run over the years: several Ghostbusters scenarios from Carnages past, Unknown Armies‘ archetypal Jailbreak, and this particular gem, The Celestial Legion. It’s a Hellboy/B.P.R.D. adventure I wrote back when I was getting around to more conventions in New England than Carnage. Forgive me, purists, because it was written using mainly Guillermo del Toro’s Hellboy film as inspiration, because that was my first real experience with the character. Only in the case of my conception of the B.P.R.D, most of the team members are weirdos like Sparky here — the Russian werebear assassin, the psychic supermodel — plus the much put-upon token normal agent, whose most-used piece of gear was the clicker gadget on his belt to track the collateral damage tally.

The sharp-eyed may note that the player materials I make are heavily patterned after the sample characters in the Buffy the Vampire Slayer and Angel role-playing games: short bio, some notes to guide how the character might act and look at things, and a full character sheet on another page. In this case, it was because I ran the game using Cinematic Unisystem and may have borrowed more than a few pieces of art from the sample character spreads for character portraits. (Sparky’s particular portrait is a work called Creacion del golem by Gabos on DeviantArt.com.)

I still feel proud of The Celestial Legion for being one of the more robustly documented adventures I’ve written, but I think the second and third acts need work. As is my bad habit, I came up with a great concept, detailed how it all kicks off and then the detailing and robustness of what might happen trails off as the narrative progresses. The more I think about it now, the more I realize I can’t tell you what the climax of the adventure is, or how it pays off the prior scenes.