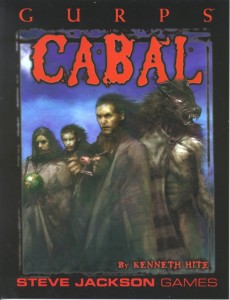 This is another of those topics where I can hardly choose a single favorite. Not least because I feel like I don’t have enough exposure to settings in play, as opposed to having read the book and shelved it. So with the caveat that it’s one of my favorites mostly because it’s a fun read, I nominate GURPS Cabal.

The Cabal began as a mini-setting in the second edition of GURPS Horror, but it was Ken Hite’s expansion of the original material into a full supplement of its own, along with the usual GURPS rules expansion, that made reading about the Cabal so amazing. Hite took the basic framework of a mutual aid society for sorcerers, monsters, faeries, reptoids and so many others from the depths of classic and modern supernatural stories and blended it with real world history and occult traditions, with an especial focus on the Hermetic worldview.

There’s a dizzying secret history of the world, varied cast of characters to run up against and a cosmology straight out of the kabbalah. In short, it’s an intimidating setting to consider using in a game — I dabbled a couple times in different ways and didn’t feel very successful, relative to the bar of imagination and creativity that I felt the book set[1] — but it’s a damn fine read, and always an excellent source of ideas. But then the hard work — and I maintain it’s hard work, even as other people like to throw “Well, if you can’t figure it out, you’re just not trying” with this kind of high detail, low hand-holding material — of turning it into decisions and characters that will engage the players is still left to be done.

That said, I wish there had been more follow-up material to GURPS Cabal to read, at least. The Cabal gets a mention now and again in fourth edition GURPS material, as they became a new player in the Infinite Earths landscape and figure in the scant setting material in GURPS Thaumatology, but that’s about it, unless it’s all showing up in issues of Pyramid.

[1] I borrowed heavily for Mage: The Suppressed Transmission, and developed the Broken Spokes framework for a campaign that didn’t get past the first session and then a convention one-shot that I still feel embarrassed about.