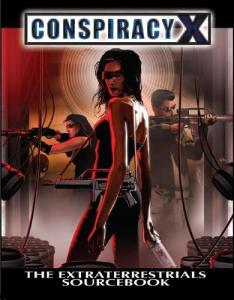 Conspiracy X isn’t your typical science fiction. It combines the weird pre-millennial “is there an apocalypse coming?” zeitgeist of the 1990s with the UFO lore of the 20th century and paranoia about government overreach, packaging it all in a familiar but legally distinct wrapper of federal agents investigating weird phenomena.

The game enjoyed a brief renaissance thanks to Kickstarter, as Eden Studios pushed out a number of supplements stuck in the pipeline after publishing a second edition of the core book, but it seems to have petered out in the years since. One of the stretch goals of the final fundraising campaign was to publish a long-rumored sequel game, Extinction, advancing the timeline one hundred years to an era when the various races are locked in all-out war for their own survival. No word on that front, and Eden’s efforts seem to be going into All Flesh Must Be Eaten and a new kid-friendly game, Adventure Maximus.