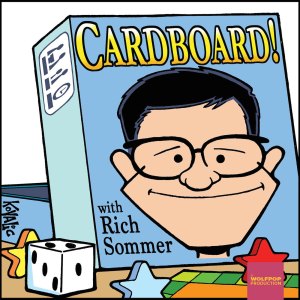 A new board game podcast premiered recently, called Cardboard! with Rich Sommer. Probably best known for playing Harry Crane on Mad Men, Rich is also a huge board game nerd. I’d heard this fact mentioned on various podcasts over the last couple years, but there wasn’t anything to follow up on. Now with Mad Men concluding, Rich has launched a podcast of his own, just to talk about board games.

The tone of Cardboard! is generally about introducing board games to newcomers. The show’s guests seem to be mostly friends who have played a game or two, or casual players, usually with a hint of celebrity around them. Rich usually tries to frame the discussion in terms of what newcomers to the hobby might want to try, and how to go about doing so. Given Cardboard!‘s position in the podosphere as a show on the pop culture-centric WolfPop network, that’s a sensible position.

Episode five, “Getting Our Hands Dirty,” bucks that trend with a full-on game nerd, Kevin Sussman, and game designer Mike Selinker. I especially dug this episode because Rich and Mike talk about the genesis of Betrayal at House on the Hill, a personal favorite of mine — and Rich’s, it turns out.

During that episode, the interesting point comes up a game that tries to inject theme purely through flavor text on cards and rule books fails. The mechanics of the game have to be part of creating the theme. The example comes up of Martin Wallace games: the rules of a rail tycoon game encourage ruthless exploitation, and so the players find themselves feeling like exploitative rail tycoons.

(By that token, I found myself wondering whether games like Arkham Horror and Eldritch Horror do a good job of implementing their theme. Given they usually feel like a struggle against impossible odds, I’ll say yes for now.)

Cardboard! is a fun, snappy listen. The segments are varied, well-timed, and Rich Sommer is an energetic, engaging host who keep one eye on “I love board games and want to talk about them all the time!” and the other on “this show needs to be entertaining for the non-hardcore nerds, too.”