Join me in welcoming Dan as a contributor to Held Action. You may remember him from Carrion Crown, Mummy’s Mask and Carnagecast. This time, Dan’s written an actual play report of running Fate of the Norns: Ragnarok, which has proven quite popular at Carnage and around Vermont. Take it away, Dan!

This past Saturday, down at Brap’s Magic, I ran a one-shot session of Fate of the Norns: Ragnarok, using the quick-start rules, pregenerated characters, and adventure provided in the Fafnir’s Treasure sourcebook. I was joined by Toby, Hunter, Jake, Cory, and Tom.

After a bit of explanation of how the Runic Game System works, and a rundown of the pregens, we had this lineup:

Once the characters were chosen and folks read over their various abilities and such, we got right into it. After here, be warned: spoilers for Fafnir’s Treasure abound!

The scene opened on the docks outside the Icelandic town of Evingard — the party’s ship had been attacked by ice krakens, but made it to town, sailing though the sunless days and moonless nights of the Fimbulwinter, their way lit only by the stars.

Abandoned by the ship captain, they wandered to the gates of the town, only to find scorch marks on the walls, arrows all over, and a bunch of dead, dying, and wounded townsfolk — the guards quickly explained that the town was seemingly cursed: the mine was shut down, there were undead polar bears attacking every few hours, and to make matters worse, the town was playing host to Volstagg the Einherjar, an emissary of the Aesir, and Aud the Son of Muspel, an emissary of the Jotuns. Either of these immortal beings could destroy the whole town, if the mood struck them, but the guards were afraid that if they fell to fighting, they’d level the town and everyone in it.

While the guards were explaining what was going on, Fjori took out his harp and played a song about the Apples of Idun, a powerful healing melody, and helped many of the wounded to live on.

They headed into the town, seeing the poor and destitute eking out a miserable existence, beset by frostbite, while the wealthy strut around in silks and jewels. Truly, all bonds of human kindness have broken down during Ragnarok!

The gate guards had mentioned that there was a tavern called the Burning Boar in town. Expressing a desire to see a flaming pig, Sigyn exhorted everyone to head there for some drinking and maybe to meet this Einherjar, Volstagg. Well, the tavern didn’t have an actual pig on fire, but it *did* have an abundance of delicious raspberry fishcakes! A true Nordic delicacy, but the tavernkeep, Sven, refused to say where he got raspberries in the time of the Fimbulwinter, when the sun and moon had been eaten by wolves.

Well, after a bit of knife-throwing with the guards, some drinking and more of those fantastic raspberry fishcakes, our heroes went up to speak to the Einherjar, Volstagg. Volstagg explained that he seeks Andvarinaut, the Ring of the Niebelungs. He would use the gold it makes to finance the Aesir armies when the last battle comes. While he told the story of Fafnir and the treasure, though, Vanadis slipped into the shadows and out into the town. She crept to Astrid’s House of Pleasure, where she had heard that Aud, the Son of Muspel was staying. While the others discussed things with Volstagg, Vanadis asked Aud what he wanted — well, of course he wanted Andvarinaut as well! Many armies can be paid from the gold brought forth from the ring.

Eventually, everyone regrouped at the Burning Boar. They drank, they sang, they talked about the problems in town. Vanadis wanted to investigate the mines, so they did talk to Magnus, the mine-owner — but he did not want to discuss the matter. So, they decided to go after the great treasure. They wanted supplies, though, and alas! did not have enough skatt to buy skis or snowshoes or any other supplies. Reasoning that the town would reward them if they dealt with these supposedly unkillable bears, they decided to investigate. The townsfolk told them that they had tried everything to kill the bears — swords, arrows, fire, everything, but the bears just keep rising and coming back. Turbog tracked the bears, and determined they were coming from the forests to the northwest, so they headed out. 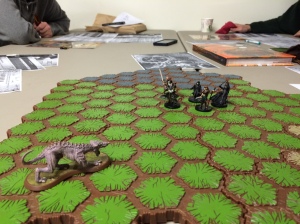 It didn’t take long before they encountered a ragged bear, a miserable white specimen that looked as though it had been killed over and over again. It roared and charged at them!

The bears claws were deadly, and its icy breath chilling — but when Sigyn enraged it with her snide taunts, Turbog slew it with his maul. They burned the body as best they could, but they couldn’t know if it would stay dead. They chose to press on.

After camping in the night-black woods, the dark chill kept away only by their campfire, they headed further into the snows. It wasn’t long before they found more bears.

Jokull called on the power of the World-Tree to create an alka to erode the bears’ life-force, Vanadis invoked her seith to snap their bones, and Fjori unleashed his song of the Long Knives, spurring his friends to ever-greater heights of combat prowess. The bears did not stand a chance before the onslaught of these mighty heroes.

No matter how many they killed, though, the bears kept coming. 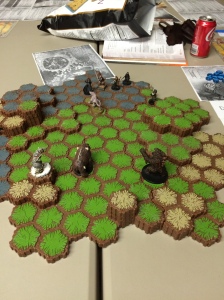 Sigyn taunted the bears, slashing at them with her sword. Turbog took the form of a deadly blood-wolf to savage them. Fjori sang of the long knives, and he stabbed them in the back when they were attacking others. Vanadis snapped their bones, and called on the dead sun and moon to heal her compatriots. Jokull’s runic powers called forth the alka of Yggdrasil to harm them, and used his crossbow to send them flying. Eventually, after slaying bear after bear, taking grievous wounds themselves, they reached a deep crevasse at the base of the mountains, the ground falling away into darkness.

Jokull and Vanadis studied the crevasse, consulting the runes and reading the omens. They determined that the crevasse was full of the stuff of Niflheim, and was corrupting the bears, making them even more deadly. They didn’t know what to do, at first, but then Vanadis opened herself to the spirit of the mountains, using her seith magic to become a living conduit for the will and desire of the landvaettir.

The spirit spoke through her, and told that it knew of the corruption leaking from Niflheim in the crevasse. It said that it would fall into the crevasse and bury the foulness, but only if they did something for it, first. It knew of a place of comfort and springtime nearby, and it wished to feel that spring weather upon its mountaintop again.

They had no idea how to accomplish this, so they went back to Evingard to talk to Sven again. As the local tavernkeep, he seemed to have a pretty good handle on what was up in town. Eventually, with much mead and skilful cajoling from Sigyn, they did get him to reveal where he was getting those amazing raspberries — from Ivar the druid. They surmised that a druid might dwell in the stone circle they’d seen outside town, so they headed there to beard the druid in his den.

It took some yelling, some pounding on the walls, and a bit of smashing things up to get Ivar to acknowledge them, but eventually he grudgingly opened his manse to them and brought them into his lands — his druid’s power kept his land green and growing, even in the midst of the eternal night of Ragnarok. With some doing, the party gained Ivar’s trust — at least, enough for him to tell them what he would desire if he were to make the three or four day hike to the mountain, and then the week of work to make it feel the spring again. It turned out that Ivar is Ingvar’s son — Ingvar being the chieftain of the Wolf Clan and ruler of Evingard. He was exiled for marrying his sister, Ingvar’s daughter. He wanted the exile lifted — not to live in Evingard again, but freedom to travel there as needed. Tutting a bit at this indecorous behavior, everyone decided to talk to Ingvar anyway — what does it matter of Ivar marries his sister Bera? the world would be over soon anyway, let men and women seek what solace they can, ere Garm’s third howl.

Ingvar, at least, was easy to find — his hall was the greatest in Evingard. Explaining that they could solve the bear problem, Ingvar’s guards led them to the old war-hound. Stroking his beard, Ingvar heard their plea. The old man weighed the plague of bears against his son’s misdeeds, and decided that it should be left to Jadvyg, the Angel of Death.

Entering the frozen cemetery, the party were struck by how silent it was, even inside the town walls. They found the Angel of Death in the House of Hel in the burying ground’s center. Speaking to her in the silent darkness of that place, they had to speak carefully — Jadvyg suffers neither fool or idle chatter. She asked them about the Einherjar and the Son of Muspel — she had heard they spoke with the immortals, and she wished to know whom they would serve. At first, the party tried to hedge their bets, and avoid a decision — but the crone would not have it. She gave them one chance to decide and decide now, and how they chose would tell her everything she needed to know about them and whether or no she should support their plea to help Ivar.

Well, they could not decide. They talked about it, but were unsure whom they should support — until Jokull the galdr realized the best course of action — to let the runes decide. He raised up his bag of runes and wyrded one solitary rune — and the runes indicated they should serve the Aesir.

Jadvyg nodded, satisfied. She send a message to Ingvar that she would support lifting Ivar’s exile. Ivar traveled to the mountain top and in due time the rumbles of a great avalanche were heard. The foul current of Niflheim were drowned in a thousand tons of snow and rock, and the bears returned to being regular bears. Ingvar rewarded the heroes with a feast and a thousand skatt, and they prepared later to head out in search of the treasure for Volstagg — but that is a story for another time.

And that is where we ended it — they got a little ways into the hunt for Fafnir’s treasure, but not very far before time was up. Everyone had a great time, and found the runic system to be pretty easy to use once you got used to it.