The cheap answer is “all of them.” Yes, I get to play often enough and yes, I enjoy playing those games with my friends. But I don’t think it will surprise anyone that Pathfinder is not my favorite role-playing game. 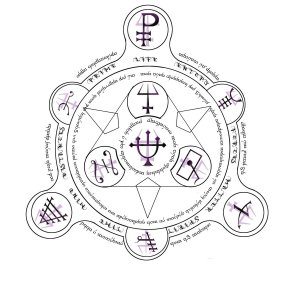 Mage: the Ascension’s cycle of creation and destruction, as rendered by Rungok.

It is, of course, Mage: the Ascension. The odd sibling out of White Wolf’s core three role-playing games, Mage benefited from having such a broad scope — “You play wizards who can do things by wanting it really hard!” — that an amazing breadth and depth of points of view clustered under the eaves of its luditorium to play. So unlike Vampire and Werewolfin the original World of Darkness, Mage could be about street punk mages sticking it to the man of the wizardly establishment, science heroes duking it out over the moons of Jupiter or the archetypal struggle against the monolithic Technocracy. When your players’ characters can do anything within the scope of their mystical paradigms, the prospect of engaging all of them at once is more than a little daunting.

I ran Mage for a while, in Quarterstaff Games’ play area as an open game. You can read the session notes, if you like. As it was only the second campaign I’d ever run — after a brief, wildly uneven Mutants & Mastermindsgame — you can’t fault my audacity. But that was running, not playing. The only time I’ve ever gotten to play Mage was in college, and that was such a wash-out on my part as a player and a person, we will never speak of it again.

Maybe someday, though. I just need to meet an industrious GMing type who loves Mage, but cannot abide crossovers. They must be out there.

2 thoughts on “#RPGaDAY 6: Favorite RPG Never Get to Play”