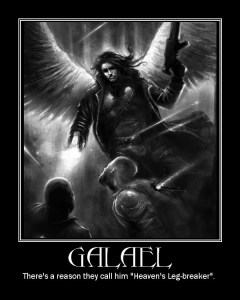 Depending on your criteria, there are several candidates for the first RPG I purchased. For full, self-contained games, there’s WitchCraft, an urban fantasy and horror game in the vein of the World of Darkness. I’d spent downtime during my academic endeavors devouring reviews of various games on RPG.net and the first time I walked into Quarterstaff Games, years after my last visit for Magic cards, my eyes stumbled across the WitchCraft core book — the whole line, in fact — tucked away on the bottom shelf of those rickety, sideways-leaning wooden shelving units that longtime customers of the store may recall. Clearly, this was fate to see something I’d been reading about right there on the shelf, however cunningly obscured, so I grabbed it and the companion Mystery Codex. And that purchase really set a theme for me, picking up games that sounded interesting, but didn’t have enough of an existing following for me to find interested people locally.

To this day, I haven’t successfully run or played in a single game using the WitchCraft materials in a substantive way, though they certainly proved useful when I brought my Ghostbusters convention series over to Unisystem last year at Carnage on the Mountain. And with the arrival of Madness Dossier, Conspiracy X 2.0 seems like a great starting point for a less crunchy implementation of neurolinguistic brain hacking and warring timelines.

Now, if you want to be really strict, the first role-playing book I ever bought was the player’s guide to the Dragonlance setting, without ever realizing it was a supplement to a game — really, without ever realizing there was a game attached to the series of novels I devoured voraciously at the time. And the first mechanical game thing I ever got was the Spelljammer box set, which is another lousy entry point into role-playing for someone who isn’t necessarily aware what Dungeons & Dragons is and how it ties to the myriad of products scattered around a Waldenbooks of the late 1980s, early 1990s.