When last we left the junior justice defenders of Lepidstadt (ret.), they stood poised to ambush a gang of trolls in the gatehouse of Schloss Caromarc. A lot has happened since then. Briefly:

Trial of the Beast 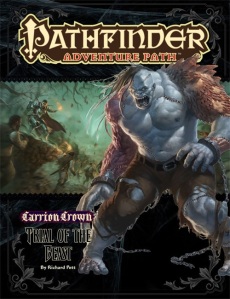 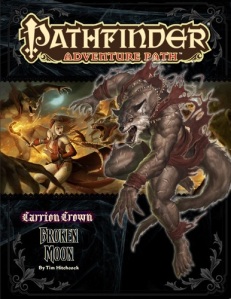 “Were you aware you would do anything for me?”
“Belloq, get the good paddle.”
— Auberon Crane doesn’t mess around with inferior tools

Wake of the Watcher 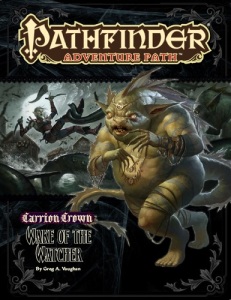 “Your pickle wife, while beautiful, is a gopher.”
— Auberon Crane puts the mayor in his place

And thus we are up to date with the tale of Carrion Crown. One of my resolutions for the year is to keep up better with this game — almost a year old! — and Skull & Shackles. I let my recaps get too long and too involved, to the point it took almost as long to write up a session as it did to play it. I don’t plan to make every entry a list of bullet points, but I will work on capturing more the essence of the action than a blow-by-blow. And I hope that will let me become more mindful of good pull quotes again. My notes for the last few months are sparse when it comes to choice one-liners, in part because they wound up buried in Twitter rather than in my notebook.

[1] Guess which one. We were sick to high heaven of all golems by the end of that module.

[2] Which we became convinced was more of a secret sex lodge than a base for affluent hunters. Much was made of looking for the hidden dungeon and spanking benches. It pains me that I can’t recapture more of that improvisational magic.

[3] Played by Joey, he of Lady Viola in Skull & Shackles, as sort of the Rick Moranis of wizards: super intelligent, none too swift, particular when it comes to questions like, “If I cast rope trick under water, will the extradimensional space fill with water?”

[4] We’re starting to see how hard wizards rock at this point in the game.

1 thought on “[Carrion Crown] The Story So Far”