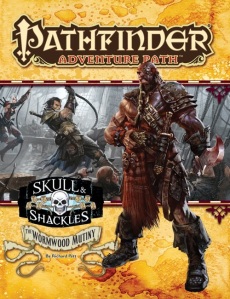 Two Fridays ago, as promised, I joined a new role-playing group to kick off the Skull & Shackles adventure path for Pathfinder.

One night in Port Peril, of all the unlikely souls wandering those streets, four in particular find themselves inside or just adjacent to the Formidably Maid, a raucous dive of a tavern: one of Cayden Cailean’s foundlings, Felix, on the trail of the dread pirate Jarreth Kay; scion of a noble house, Viola, abandoned by her erstwhile entourage; the unregarded second son of a merchant, Jetsam, now a practical, hard-nosed professional sailor; and dealer in illicit items, Morley Bishop, languishing in the stocks just outside the tavern.[1]

Into the tavern strides a figure magnificent in his long red coat. Bandoliers brimming with daggers cross his chest. He addresses the whole tavern, extolling the virtues of the Wormwood, apparently the fastest, cleanest, most rugged ship in all the Shackles, with the most stalwart crew to be found on the sea. All it needs before shipping out is a few more sturdy hands to round out the crew complement. Despite the earnestness of his pitch, no one in the Maid bites. The man in red tosses a purse to the barkeep with the instruction to keep the drink flowing tonight. Though not interested in the pitch, the tavern denizens are more than happy to accept free drink. They get to business.

Out in the street, the man in red pauses by the stocks. One fruit-smeared penitent is on display, answering to the name of Bishop. Wrongfully imprisoned for time untold, the prospect of signing on to a ship leaving with the morning tide grabs Bishop’s attention immediately. He can’t grab for the quill to make his mark fast enough — possibly because of the aforementioned stocks. After a brief word with a nearby constable, the man in red secures Bishop’s release into his custody and shuttles him straight to the Wormwood and into the custody of his new shipmates, who are rather taken aback by the sight of someone walking up the gangplank fully conscious.

“You obviously don’t know who you’re talking to.”
“I don’t think she does, either.”
— Viola and Bishop

Meanwhile, everyone back at the Formidably Maid makes merry. One by one, the drink has its way and puts each of them down into deep, dreamless sleep. The next thing to penetrate anyone’s fuzzy mind is the gentle rocking motion, almost as though they were cradled in their mother’s arms. It’s the creak of timber and whipping of the wind that gives it all away, though. The unlucky folk have been pressganged — or wandered aboard of their own accord, if sufficiently foolish.

While the unwilling recover, Bishop is approached by another pressganged crew member, Sandra Quinn. As a follower of Besmara, she’s no stranger to the rough side of the seafaring life. She mentions he should see the quartermaster, Cutthroat Grok, about recovering any personal belongings he might have had before coming on board Wormwood.

“‘E talks like a poof.”
“Maybe that’s not all I do.”
— Master Scourge and Felix Cailean

The bosun, Master Scourge, arrives to lay out the facts. Lady Viola, the refined woman of high society, stands up to him. She shrilly demands to see the captain, being well above the ignominy of kidnapping and forced labor. The Eudonia family simply will not stand for this kind of uncouth behavior. When Scourge strikes Viola to the deck, it’s Felix who leaps to her rescue. Scourge’s band of brutes bring the chivalrous follower of Cayden Cailean to his knees none too kindly.

Eventually, everyone is brought up on deck for inspection by Mr Plugg, a bald man carrying a set of cat o’ nine tails which he wields with unnerving intimacy. On the poop deck is the grim figure of Captain Harringan, master of the Wormwood. He stays aloof from the proceedings below as Mr Plugg puts the new crew in their places. Viola’s protests are quickly muffled. Both she and Felix are lashed for their insolence — and a convenient lesson to the new crew about the severity of the discipline Mr Plugg enforces.

Display of force made, Plugg doles out duties to the crew. Bishop is sent down to the galley as mate to the cook, Ambrose “Fishguts” Croup. Fishguts is mostly interested in drinking and “seasoning” the crew’s meals with various bodily fluids. Despite being an archaeologist and not a swineherd, Bishop manages to slaughter a pig for the evening meal without too much difficulty.

A sailor by trade and remaining fairly equanimous to the situation, Jetsam is sent to work up in the rigging, where he connects with Tulach Shortstone, a gnomish sailor. His first day of mostly uneventful, though dropping block and tackle to the deck mars his quiet, efficient labor.

“It’s like needlepoint! They ever train you in that?”
— Felix to Viola

When Viola and Felix recover from their lashings, the highborn lady is sent to sew sails and swab the deck. Almost supernaturally, when Viola accidentally sews two sails together, Mr Plugg is there with his “discipline.” Eudonia rails against the “vile, horrid man,” but he is unswayed, clearly relishing every opportunity to beat obedience into his thralls. Felix bravely steps in again, offering to take Lady Viola’s lashings on himself. Scourge ups the stakes, hanging Felix from the yardarm, dropping him hard to the deck.

“I was right. He does like the deck.”
“I’m rigging. Swabbies are mostly tied to the mast.”
— Jetsam observes the plight of Felix and Viola

Later, as night falls, Scourge makes an example out of crew man Jakes, who was caught stealing. Lashed at and suspended from his wrists and ankles, Jakes is pushed over the prow of the ship. The ropes run along the sides of Wormwood. Eventually, at the aft end, Jakes is dragged up, bruised and splintered from his ordeal along the keel of the ship. Just as Jakes begins to recover, Scourge abruptly pushes him over the railing again. Blood in the water brings sharks in short order and that is the end of Jakes. Eyes glinting with far too much pleasure at such discipline, Scourge reminds everyone that to steal on board the Wormwood is to steal from everyone.

Quinn emerges from the crowd again, gathering the new recruits around her. With a prayer to Besmara, she heals Felix’s crushed throat. His first words are to promise repayment once he is master of Wormwood. This brings up the whole topic of overthrowing the current regime aboard the ship. The new kids have to stick together to survive on a ship like Wormwood.

During the evening hours, Felix and Viola approach the quartermaster about their belongings. Viola wants her parasol and shoes back, while Felix is concerned about the disposition of the cask of Caiden Cailean’s sacramental ale. It turns out to have found its way into the mugs of Scourge and Cutthroat Grok, which is sort of where Felix wanted it to land. Felix changes tactics, angling for his holy tankard.[2] Companionship is off the table for Felix, but he entices Cutthroat with the prospect of brewing mead in the galley — plus his remaining grog ration.

While Quinn and Bishop engage in some friendly yet crooked dicing, Viola continues her networking with the female portion of the crew. Rosie the halfling offers some advice about sleeping arrangements. Finally the night activities draw to a close and the crew retreat to their hammocks.

The next morning, day two of the new recruits’ maritime adventure, they find their way abovedecks blocked by a gang of surly sailors. Jetsam doesn’t take any guff, first staring them down, then being the first to draw blood with his stashed rigging knife. Al-Bhar coolly continues on his way above. No one steps up to stop him.

Now Felix on the other hand, Felix locks horns with another of the ruffians and neither is willing to back down. Bishop tries to defuse the situation, but no one’s listening. Felix goes so far as to offer the sailor a free punch right on the chin. Viola swings a length of block and tackle to keep the others at bay.

Abruptly the gang withdraws, dashing up to the main deck. The ship’s bell rings. They successfully delayed the recruits in reporting for duty. Scourge is rather delighted at the prospect of doling out discipline. Bishop and Eudonia take lashes for their tardiness. When Felix tries to take all the blame on himself, Scourge decides to break out a new technique: the mallet. Mashed against the railing, Felix’s hand begins to swell and turn black almost immediately. To cement the lesson, Scourge consigns the Caileanite to the sweat box for the remainder of the day.

For the others, the day passes somewhat more uneventfully. Bishop builds a rapport with Croup, learning more about the ship’s crew. Croup confides that he gambled away his life to the captain — and that he breeds chickens. Everyone needs a hobby, right? The chickens and “seasoning” the ship’s food[3] occupy Croup’s time. Viola begins to find her place among the swabbies, building relationships rather than focusing on her tasks. Jetsam has more of a mixed response in the rigging; there are friends and foes alike up in the air.

At the end of the day, Felix is dragged from the sweat box. His mangled hand is black, puffy from swelling and oozing liquids better kept on the inside. Sandra Quinn emerges from the crowd and lays her hand over Felix’s, healing the injury — and making him ready for the day’s work to come.

This night, it’s Jetsam who approaches Grok the quartermaster, seeking only his scimitar. After some rifling through the stores, the drink-befuddled half-orc finds the one in question after a few false tries that don’t come close to al-Bhar’s treasured blade. The after hours activities go on until the grog rations run out, then most people retreat below to sleep or await their turn on the night’s watch.

[1] I blinked a bit when my idea of a black market antiquities deal gone wrong translated to my character starting off in the stocks, which effectively took him out of initial interaction with the other player characters. But in the end, it paid off, partly for the fun of the scene of him worming his way out, but also the distinction of being the only volunteer.

[2] The more I learn about the worship of Cayden Cailean, the more intrigued I am. And by “intrigued,” I mean “thirsty.”

[3] Playing along with Croup, Morley contributed a snot rocket or two the day’s meal. And in miming, I managed to launch a real one to everyone’s amusement. Ah, verisimilitude.