Travis of Boardgamegeek brings us the pinnacle, the acme, the highest of achievements in figuring out how to store the sprawling excesses of Arkham Horror and its expansions.

The picture to the right is just the tip of the iceberg. Travis takes you into the case, its myriad compartments and the many pieces of accoutrement with which he gussied it. Check it out now — and bring a snack. It’s a long journey. 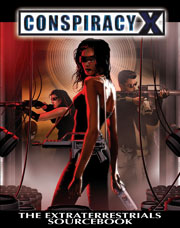 The Extraterrestrials Sourcebook for Eden Studios‘ Conspiracy X game line may see the light of the material world after all. Yesterday afternoon, George Vasilakos opened the Kickstarter page to put out the hard copy version of the book.

I jumped right on board, pledging enough money to get the printed edition. (I think I may have been one of the first two backers, actually . . . ) Of course, this being a Kickstarter project, Eden needs to raise the whole $5,000 by the November 30th deadline in order to collect the funds and send the book to the printer.

Conspiracy X has served me well as the engine for our Doctor Who campaign. I would love for crowd-funding to revive the series, which gets undue short shrift in the ever-balkanizing role-playing hobby. In addition to the Conspiracy X universe, which blends together the modern mythologies of Men in Black, grey aliens and other weirdness, the game is a solid platform on which to base any game in the modern era. Plus it’s cross-compatible with the other classic Unisystem games, and pretty equally compatible with Cinematic Unisystem material as well.

Furthermore, I would also love for this venture to show Eden Studios that crowd-funding can work for their other unreleased works, especially the WitchCraft supplements caught in their pipeline, so I have more than one reason to throw down for The Extraterrestrials Handbook. Not only could I get that book, but WitchCraft fans might have the opportunity to front for The Book of Geburah.