A grange hall full of gamers in Lyndonville, Vermont.

This past Saturday was Fall-loha 2010, the second of the Green Mountain Gamers‘ game days around the state of Vermont. Fall-loha took place up in the Northeast Kingdom, in the town of Lyndonville. We learned some things from this summer’s Game ‘n Grill, namely don’t over-schedule a game day. Open play allows things to flow organically, including jumping into a new game without worrying about “missing” something on the schedule. It also makes ducking out for lunch and dinner so much less hurried. 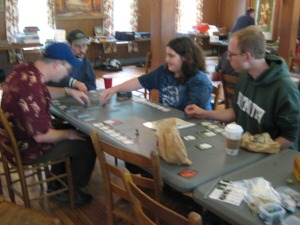 We arrived at the grange hall to find things in full swing, having been waylaid by the slowest cider-pourer in New England. Alex, Chuck, Richard, Andy and I leapt into Castle Ravenloft, the new dungeon crawl board game based on the Dungeons & Dragons role-playing game. It was surprisingly difficult. I don’t know why I’m consistently surprised that cooperative games are difficult, but I am. Probably just as well I didn’t get to try Defenders of the Realm as I originally planned or I would have been flummoxed all over again.

So it was surprisingly difficult, but very fun. I played the dragonborn fighter, who was refreshingly beefy with fourteen hit points. Shame they didn’t last. Castle Ravenloft has an interesting mix of monsters to fight and encounters, which are sometimes environmental hazards, mechanical traps or NPC actions, like Strahd appearing to hassle the party.

Each monster has a set of rules by which it acts, which means there’s no overlord-like player, as in Descent. Not only does this have the benefit of avoiding the overlord-heroes antagonism of Descent, but it means some things have to be abstracted out, which I liked. Some traps work on the level of a tile, rather than a single individual being targeted by a falling boulder, for example. When someone is targeted, it’s usually in terms of the active player, which helps spread the love — and is a marked contrast to being the overlord in Descent, where the best gameplan is to grind one particular player’s character into the muck endlessly without mercy.

That said, Castle Ravenloft has a tough loss condition: as soon as any one character runs out of hit points, the game ends. The party gets two healing surges, which will restore hit points to a single character, but we burned through those in short order. In fact, I think the second healing surge was eaten up in a cascading wave of hero deaths that ultimately ended the game. I may be misremembering that one, though.

Getting Back to the Future

After Castle Ravenloft, I bowed out of the foregone rematch in order to play Back to the Future with Rod, and whomever else wanted to get back in time. This was my second play of the game since buying it last Tuesday. It went a lot better this time, partly because I was able to explain it more succinctly without falling back on the habits of Chrononauts, but also because everyone really got into the interpersonal dynamics of altering history to suit one’s needs. Chuck and I got into a real struggle over whether Clara Clayton should live or die; every time I pulled her to safety, he stood at the ready to shove her over the cliff.

In an interesting comparison, I played another round of Back to the Future later in the day, with a slightly different set of players. We started off just as energetic, but as the game dragged on — for lack of failing to draw the one linchpin card in which Doc Brown successfully hangs his clock — the energy levels tapered precipitously, to the point we unanimously agreed to end the game the next time someone drew that linchpin card, regardless of which one it happened to be. That’s a strong sign to me that letting the game drag on for lack of drawing a special card decreases the players’ enjoyment factor.

Joe and Charlton prepare for a story rife with riotous repercussions.

After lunch, I was all set to learn Fiasco. I’d seen Charlton lead this at TotalCon last winter, where it looked like enough fun that I wanted to give it a try. It was surprisingly difficult, in all honesty. My flashes of improvisation inspiration come and go with a frustrating consistency of fleetingness. While I didn’t not have fun with Fiasco, it was never quite to the levels of fun I saw in the game at TotalCon. I’ll write more about this session for Actual Play Friday, so keep an eye out for that.

On completing Fiasco and the aforementioned round of Back to the Future, we headed out for dinner at Trout River Brewery and Pub. On leaving the hall, we learned Trout River’s “pub” is strictly pizza, but I didn’t let that dissuade me. I’ve been a fan of Trout River for some years now. I wasn’t about to pass up the chance to see what brews they had that aren’t making it through the distribution system to Burlington. Turns out Trout River is a phenomenally popular joint, such that half the party turned away to get quicker food up the road. Fortunately for those five of us who stayed, the pizza and beer were both excellent. I don’t know if the wait was entirely worth it, but it was nice to hang out for a bit away from games and chat.

It’s true, I really didn’t. My brain just did not want to work after dinner. I think I was a little too pleasantly full of beer and pizza, to the point that I could come up with a name for my stuffy Pemberton professor — Peyton Cabot Harrison III, swiped from an episode of The West Wing — and then completely failed to get traction on anything, beyond acting as foil for Andy and Joe’s own characters on a couple occasions.

I can’t say I didn’t have fun with Shab-al-Hiri Roach, as I didn’t actually play it, but my god, did it give me a hard time, to the point I actually felt embarrassed for being such a lump. I also made the deathly mistake of cutting off Charlton’s offered hook before he could finish the sentence, something at which any improviser should gleefully leap when the opportunity arises. My only excuse is I was just tired of being frustrated and mentally fuzzy to the point of not wanting to attempt engagement with the game anymore.

There may or may not be more on this one on some future Actual Play Friday, depending on how my memory of the experience matures.

All in all, though, it was a really good day. Everyone else had lots of fun. I was amazed by the number of people who came from the different corners of the state. So many people from all around came, in fact, that I didn’t get to spend time with everyone I might have liked; Nonny and her husband Jon seemingly came and went so fast I feel I barely got to say hello, while others and I never had overlapping free time: Bob, Joe, Robert, I’m looking at you.

I think we’ve got something with these Green Mountain Game Days. Once is a fluke, twice is promising, three times is a pattern. A successful Winter Weirdness in January will satisfy me, but after Fall-loha, I’m pretty comfortable saying we’ve hit on a winning combination of time invested, opportunity creation and spreading the word.