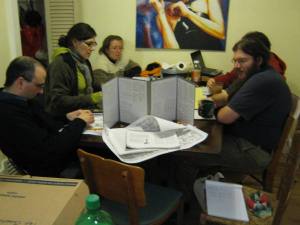 Left to right: Lasoleg the Elf, Gringo the Halfling, Bob the Cleric and Pope the Dwarf. Fittingly, Dingus the Thief cannot be seen.

For International Traditional Gaming Week, I rounded up some players to delve into Castle of the Mad Archmage using the Labyrinth Lord rules. For most of the people at the table, it was their first time with an old school ruleset, including myself. On their way to explore Castle Greyhawk for fame and fortune, Lasoleg the elf, Gringo the halfling, Bob the cleric, Dingus the thief and Pope the dwarf found themselves abruptly tumbling down into unexplored depths when a hidden quicksand pit deposited them on the outskirts of a sprawling underground complex.

When the idea to run this first popped into my head, I had no idea what to expect. I came to role-playing late enough that third edition Dungeons & Dragons was the de facto standard. My only real exposure to the older versions came from the adaptation used by the Baldur’s Gate computer games — fine games in their own right, but they don’t really give you the flavor of consulting a THAC0 table or figuring how many more experience points the elf earned for the ochre jelly.

We hit procedural snags in the run-up to game night. Due to my own inexperience with Labyrinth Lord, I let assumptions from my own play experience with later versions affect character creation guidelines, like specifying a starting XP amount, rather than level, or not stating the ability score generation method — roll 3d6, six times in a row, no rearranging. Those questions taught me about working more with the players in character creation; in my odd world dominated by convention one-shots, the only person I have to dicker with over a character is my internal critic about whether it’s too similar to the others. Players have their own set of expectations and priorities when it comes to their characters.

Game night itself was awesome. Nonny went old school on snacks, bringing Mountain Dew and — multi-grain, vegetable oil fried — cheese puffs. Add a trio of pizzas from Leonardo’s and garlic cloves in oil or salt or some combination thereof, and it was carb and salt-loading heaven. So fortified, the adventurers strode — well, fell by way of a quicksand pit — into adventure.

This was the first time I participated in a dungeon-based adventure from the GM’s side of the screen. It was funny seeing the players balancing the desire for their characters to survive with figuring out the oddest little quirks of the dungeon. “I want to go back and check out . . . ” was a frequently uttered phrase at the table, as there was always another passage to explore or catch to pull or door to open. Castle of the Mad Archmage in particular subscribed to the philosophy that it’s the players themselves pitted against the mysteries and dangers of the labyrinth. If the player knows it, so does the character. And that’s what led to Gringo attempting a tracheotomy on poor Pope, suffering from choking yellow mold spores, with a quill borrowed from Dingus. And it worked, too, so that was pretty awesome.

Given this was a one-shot, we had a range of characterization brought to the table. Nonny surprised me by how in-depth she got with Bob the cleric, who was devoted to the prospect of administering last rites to as many beings as he could, including those he brought to the brink of death himself. Neil’s Dingus also came with back story, which always fun to spontaneously weave together with other players’ actions and attitudes. We also had a couple characters who were mostly themselves, with some appropriate characteristics attached. Annick made me laugh when she declared Gringo would ride along on Pope’s pack mule.

All in all, it was an excellent evening. I got some practical experience with the roots of the role-playing hobby. I was mostly amused by quirks of Labyrinth Lord‘s emulation of the old school rules, particular the armor class table. For the first half of the evening, I used the table on a GM screen insert I found on the internet, until realizing it was intended for use with the advanced edition companion classes; really, I should have noticed it included classes like Illusionist and Assassin, while leaving out Elves, Dwarves and Halflings sometime sooner.

I wouldn’t use Labyrinth Lord as a go-to fantasy dungeon crawl system just because it doesn’t have the kind of emotional resonance for me that it does for its fiercest proponents. I didn’t grow up on the red box or any other flavor of Dungeons & Dragons, so I don’t have any real attachment to doing things that way or fond memories of campaigns gone by, but there are a lot of things I love about it. Random monster encounters and treasure tables are a hoot. The dungeoneering lens works like a metered poem, in a way: everything takes place with a specified context, but within those boundaries, players and GMs can do whatever they want — also true for any other role-playing game, but dungeon crawling has become a sub-genre all its own because of the popularity of Dungeons & Dragons and its family of related games. The opportunity to engage with that sub-genre and the traditions and jokes that have built up over thirty-odd years was worth the time and energy all by itself.